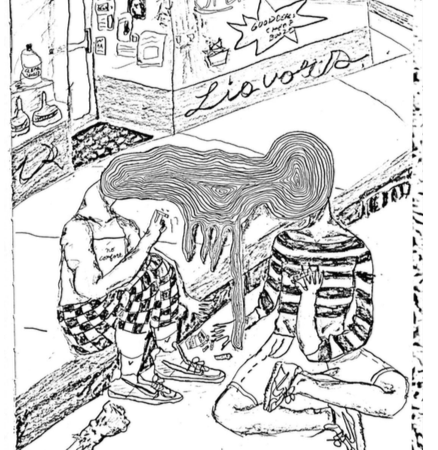 I hate the highway. The highway that tore apart the city and split it in two. The city I will no longer come to call home. Mama says they built cities for children. Children like us. The ones that sit upright with attention to watch the sunset. So that when they look up and the sun disappears into the rumble of glass and metal they will see their utopias in the angular buildings of the city. Grass no longer grows from this soil. Instead, it births highrises and highways. We do not complain. Our streets do not bring us to grand cathedrals or skyscrapers. They lead to liquor stores.

I hate liquor stores. The ones they built on every block. The reason why everyone drinks. We are not drinking to forget where we are or because we cannot leave. We drink because that is all there is to do. And when that is all there is to do all you want is to forget and leave. It was not always like this. Mama says, in the beginning, we belonged to the land as she let us become acquainted with her rocky shore. Her shore was controlled by large rocks with seductive curves, each arch tempting us to touch what had never been touched before. To cultivate her earth and admire her delicate flowers.

That is not what happened. We did not dig our feet into the firm sand or swim in her shallow bay. Instead, we opened our arms wide and looked up to the stars, praying to a man we have yet to meet. The one we call god. And we gave him thanks. And we prayed he would make our city great.

A city is what we wanted.

A city belonging to god.

A city that would shine atop a hill as the children process to the sound of church bells. So we raised our shovels and buckets and began hacking away at her shoreline, piercing the earth with iron until we had molded her a new set of lungs out of copper and steel. So she bled us oceans and birthed us a sky to rule over as we continued to thank our own creations. There was nothing left for her to do but cry until the soil was flooded with rain and the air smelled of dew. The leaves hung their heads low, hunched over before the land begging for her to stop.

She did not stop and neither did we. We did not put down our axes or lower the shovels but instead, with angry fists waving in the air we cursed at our god as we rapidly increased the pace. She risked drowning herself to death, leaving the grass croaking for air as it was pulled from the earth until she had stripped herself of her green clothing exposing her brown skin. All that was left was mud as metal frames cast silhouettes over pools of water containing wire and broken glass.

All that was left was not left alone. The mud turned to pristine streets for us to race down. Metal frames became skyscrapers to jump from and mazes to get lost in. We invented time, created money and preached of an angry god. And we are angry too; growing slick tongues and straight backs. Now we get high to meet god; to touch his face and kiss his feet. We worship at the altar of a liquor store and find truth at the bottom of a bottle. And you would be surprised how much Mama can drink when she tells herself it is water and tries to baptize herself in it. Drunkenly we walked past her body, mangled and tired. Mangled and tired she is left for the conception of a city.

A city is what we wanted.

A city belonging to god.

A city that now sits atop a hill as children hang from trees like fruit and church bells announce the death of another boy killed by a man. So lately I have come to fear the sound of church bells and been wary of the voice of god when it calls to me. And as I sit and the sun hits the asphalt I find myself in the middle of a heated discussion. A discussion that does not require speaking but smoking cigarette butts stolen off the ashtray that sits atop the front porch.

Mama keeps her pack of smokes next to her crack pipe.

The crack pipe her prized possession, one she thinks I know nothing about. I have come to discover her habit as sitting on the curb of the cul-de-sac has become a regular occurrence as she gets into strange cars belonging to strange men, frantically turning tricks for rock. One butt is no longer enough. So I stockpile. Stockpile until I have enough to get a headrush. By now I call it a revelation, some sort of intervention that will somehow make it easier to watch her stumble out of the 2012 red Subaru STI. And with each drag, I try to convince myself I have been enlightened.

I hate my name. The one Mama no longer calls me by. I have become an array of incoherent syllables that never match. I no longer ask Mama if she loves me because she would tell me that there are things more complicated than love. I hate love. So I no longer ask. Instead, I walk two blocks to the nearest liquor store. The one where men sit outside sippin’ forties as the streetlights flicker on and off. That is where I will meet Joe.

I hate Joe. I know I shouldn’t but I do. Joe had a short scraggly black beard littered with gray hairs and occasionally slept in a shopping cart at night. He said he was forty-five and that one day he would leave this town to find a home with a white picket fence. Joe never got his white picket fence but he did get handed twenty-dollar bills by all the underage kids on the block for cigarettes and booze. I met Joe for the first time on my seventh birthday when I decided I was old enough to start smoking. Mama caught me smoking one time and loved me the only way she knew how: until I was black and blue.

I have not quit yet.

During the five minutes that Joe lasts inside, the remaining men will dissect me with their stares saying things‘he’s going to be a fag’ and pointing out my ‘dainty wrists.’ And because I am young and do not know what they are truly saying I will give them a blank stare and recite thank yous believing these to be compliments.

These are not compliments.

When Joe comes back out he will be holding a pack of cigarettes and a fifth of whiskey. I will take the pack as he trails behind walking me home, occasionally taking swigs between his giant steps, making sure I made it back before dark. These silent walks had become a weekly occurrence as Joe would waver off the doorstep as the front doors locked. Mama didn’t like me outside once the streetlights came on. She said it was because she didn’t wanna see me dead, I think she was too scared to step foot within the walls of a church. She was never around when I was home, usually burrowed away in her room where wooden planks replaced windows and a computer screen was used as light. She spent most of her time there scrubbing a pair of unwanted fingerprints off a crumbling white wall.

I did not exist beyond the two blocks to the liquor store or underneath the glow of streetlights but the street’s light glowed on Joe. Tonight, the bitter burn of brown liquor will bring him into a deep depression where he will find himself saying things like ‘I’d be better off dead’ and ‘I wish I was never born.’ Once again finding himself surrounded by faces whose names he cannot remember, gathered around a fire doused in gasoline, trading anecdotes for the opportunity to taste something tangible.

Another handle is gone.

Another starless night reflected upon a murky river where bodies lie, sunken and lifeless.

What will happen next to Joe will not matter. No one cares about what happens to men without white picket fences. The ones who sit outside the liquor store as the dimly lit street lights flicker on and off. On and off and on and off as bodies lie, sunken and lifeless. I choose not to synthesize those matters. Instead, I will smoke a pack of Marlboro Reds to the very last butt and pray they bring divine intervention.